The stately piano and Phillip Jones Brass Ensemble give “Wanderlust” perhaps the finest sense of grandeur of any McCartney composition, which is why it was one of the newer songs he performed in his 1984 film Give My Regards to Broad Street (with Ringo on drums). The weariness in his vocals seems to carry the tragedy of Lennon’s recent murder.

So it is first almost disappointing to learn that lyrically it recounts the story of his near bust for pot during the recording of 1978’s London Town on the yachts in the Virgin Islands. US customs raided them and gave them a stern warning about the consequences of holding weed. The captain of the yachts then told McCartney he was not going to stand for drugs on his boats and a bad argument ensued. Seriously irritated, McCartney wanted to find another boat, and some other people in the dock said he could use their catamaran, called “Wanderlust.” Since then, the name became associated with freedom in McCartney’s mind.

A much worse experience occurred in January 1980. When Wings landed in Tokyo, security quickly discovered a 219-gram/7.7 ounce bag of pot in McCartney’s luggage. They immediately escorted him to jail and cancelled the sold out shows. There has been some dispute over the years whether it was he or Linda who packed the suitcase so blatantly, either because they were stoned or because they assumed they were untouchable. The bust carried a mandatory sentence of 5 years, and it was a scary week for Macca in prison as Japanese politicians called for his trial. He was living the opening section of “Band on the Run” for real. After nine days, Japan wanted to avoid an international incident and allowed him to return to Scotland. 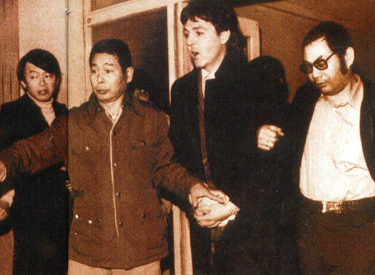 As McCartney laments being harassed for what to him seems a petty crime, one can feel the stress of all his cumulative pot busts and the emotional toll it must have taken on him. In the big picture, it reflects how the counterculture’s dependence on drugs became their Achilles’ heel. From The News of the World colluding with Scotland Yard to imprison the Stones for drugs in 1967, to the Beatles’ busts, to Abbie Hoffman hiding underground for years after a coke bust, governments used drugs as an excuse to jail anyone who didn’t get with their program.

The Beatles once planned to escape the Blue Meanie cops by buying their own Greek island, one of the fantasies of 1967’s Summer of Love that never came to fruition. But you can hear the same yearning to escape in McCartney’s sad “Wanderlust” refrain. Ten years later the Band on the Run is still running because they preferred to smoke instead of drink.