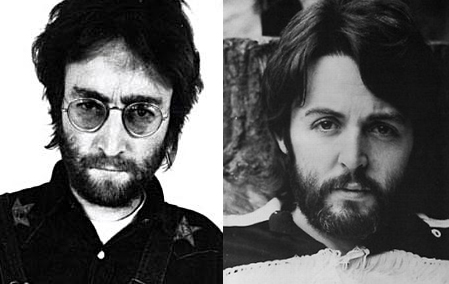 1970: Not the happiest year for either of them.

Even though they had just split up as a band, Lennon and McCartney’s debuts were very similar — dark, stripped down albums. They were both extensions of what the Beatles had tried to achieve with the Get Back/Let It Be sessions, which had been inspired by Bob Dylan. In 1967 the orchestral grandeur of Sgt. Pepper had stunned the public, and most of the rock community slavishly attempted to imitate it. Dylan, however, went in an entirely different direction with John Wesley Harding, a rustic, folksy album that featured just him, a bassist, and a drummer. The Beatles realized they had lost connection with the raw power of their roots and made their own back-to-basics album with Let It Be. Both Plastic Ono Band and McCartney continued this approach. Plastic Ono Band featured just Lennon, Starr, and Klaus Voormann on bass. McCartney went one better by playing every instrument on his album. Along with the minimalist sound, both albums share a theme of isolation.

Lennon chronicled the feelings unleashed by the Primal Scream psychotherapy he was undergoing at the time. During the recording sessions, Lennon would sometimes break down crying, but found the process to be one of the most empowering experiences of his life.

But while Lennon was excited to face a new era, a heavy depression pervades McCartney. The album’s cover features “life’s cherries” scattered outside the bowl.

Released just half a year after Abbey Road, half of McCartney’s tracks are instrumentals, since McCartney had not generated enough new songs to fill an album. Thus his album continues to receive mixed reviews, while Lennon’s is now recognized as a classic, though it was mercilessly spoofed at the time by National Lampoon as “Magical Misery Tour.”

In marked contrast to the minimalist Lennon and McCartney solo albums, Harrison stood out with the explosive bombast of his triple album set All Things Must Pass, just as he once stood out from the others through his use of Indian music. Its Phil Spector-produced Wall of Sound was the perfect backdrop for a musician who had been ignored and was now determined to make as big a splash as possible. (Though Harrison would later regret using so much echo.)